Erfgoed Leiden en Omstreken (Heritage Leiden) has made a digital reconstruction of the birthplace of Rembrandt in 2019. For 2020, the 400th anniversary of the first Pilgrims leaving Leiden for America, Heritage Leiden decided to commission impressions in 3D of four locations in Leiden around 1610-1620.

1. The Breestraat.
This impression shows City Hall (the place where civil marriages took place) as well as the house of city secretary Jan van Hout (involved in giving the Pilgrims permission to stay). The Breestraat was also the spot where the Arminian fort was built, a fort across the street to protect City Hall from religious and political riots. 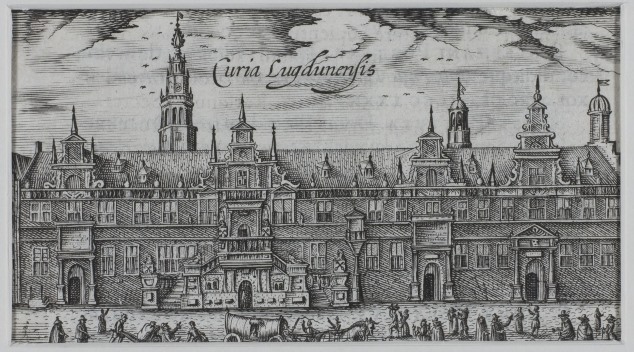 2. The Onze Lieve Vrouwekerk (church of Our Lady) Not available yet
This church was used by the numerous Walloon migrants from the end of the 16th century onwards. Some Pilgrims married Walloons. A group of Walloons from Leiden were probably amongst the first group of settlers in Nieuw Amsterdam.

3. The Faliede Begijnhofkerk (church of the beguinage) Not available yet
This church was used as a university library and a fencing school for students. The Pilgrims probably held their services here after services at home were forbidden in 1618. From 1644 this church was used by another English protestant community under Hugh Goodyear. A member of this church, Thomas Willett, was the first mayor of New York.

4. Kloksteeg 17 (Bell Alley 17) Not available yet
This house belonged to Thomas Brewer. He was part of Robinson’s congregation, but did not leave for America. Together with William Brewster, who did migrate to New Plymouth, he owned a printing works producing books that were banned in England.

Historical research
Heritage Leiden commissioned these impressions from the Stichting Verborgen Stad (Hidden City Foundation). This foundation is making a reconstruction of the route from Leiden to Delfshaven in the 17th century. Heritage Leiden provided the historical information: digital plans of houses, footprints, information from the 16th century street and canal books, the digitized maps of Bast and Blaeu, information on the height of houses and on details of buildings, streetscape, etc. Building historian Pieter-Jan De Vos of Heritage Leiden provided guidance. Stichting Verborgen Stad did research in the materials used and instructed the 3D-reconstructors.